In English, there are many, many idioms (also called idiomatic expressions). An idiom is an expression or phrase which has a meaning that is different from the literal meaning of the words. In other words, idioms don’t mean exactly what they say. 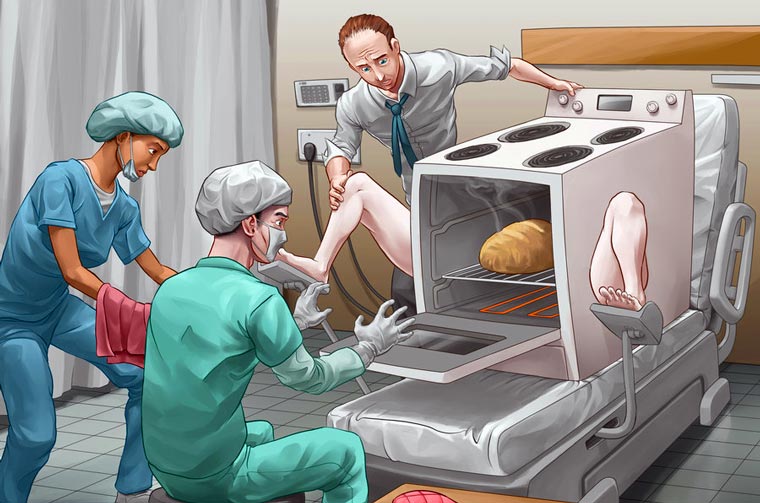 (..to have) a short fuse
Meaning: to have a bad temper / be a person who gets angry quickly
“Be careful what you say to John, he has a very short fuse”

..to draw the line
Meaning: to decide when to stop something – when something changes from acceptable to unacceptable
“You can’t let your boss call you stupid, even if you make a mistake. You have to draw the line somewhere.”

..to spit it out
Meaning: say what you are thinking (usually an instruction)
“Come on, spit it out! What’s the problem?”

..to lose your marbles:
Meaning: To go crazy
“My father has really lost his marbles… he paid £5000 for an old car because somebody told him it would be valuable in the future.”

..to be as plain as day
Meaning: something is obvious
“It’s plain as day that you don’t like your job, so why don’t you find another one?”

..to play second fiddle (to someone..)
Meaning: to be less important than somebody else
“I hate playing second fiddle to my elder brother; my parents think he does everything better than me.”

..to put your foot in your mouth / ..to put your foot in it
Meaning: To say something you shouldn’t have said – usually by accident.
“Paul really put his foot in his mouth when he asked Jane what she was going to call her baby. Her husband had promised not to tell anybody she was pregnant…”

(..I will… / Let me …..) sleep on it
Meaning: to take a little time (overnight) to consider something before making a decision
“Thank you for offering me this job, but I don’t want to make a decision now. Do you mind if I sleep on it?”

..to stick your nose into something
Meaning: to interfere or ask questions about things that are private
“Paola is always sticking her nose into other people’s business, telling them what they should so, and so on.