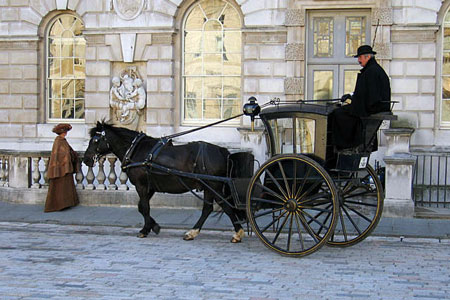 If you have seen a photo of London, you have probably seen one of London’s many black cabs, and if you visit London, you will see hundreds of them, every day.

Originally called ‘Hackney Carriages’, London’s black cabs are as British as Buckingham Palace, Big Ben or the Union Jack, and have existed for almost 400 years. In 1625 there were 25 ‘Hackney Carriages’ available for hire in London. Today there are an estimated 78,000 taxis and 153,000 private hire vehicles on the streets of London. Although the cars are normally called taxis, the London black cab is still officially called a ‘Hackey Carriage’.

London taxi drivers are almost as famous as their black cabs. This is because of their detailed knowledge of London and their ability to get passengers to their destination quickly, despite the congestion and the chaos that is part of London life.

If you stop a black cab in London, the driver will know the shortest and quickest route to your destination without needing a satnav (GPS). Less than 1% of black cab drivers use a satnav. They don’t need them. If you give your cab driver a street name, a famous attraction, the name of a pub or hotel, he will know where it is and also the quickest and shortest way to get there.

Becoming a Hackney cab driver takes several years and requires a lot of training and you need to pass a test called “The Knowledge”, which is probably the hardest taxi driver test in the world.

To pass, drivers need to memorise every possible route through the city and know the names and locations of thousands of landmarks, museums, parks, police stations, churches, theatres and schools. 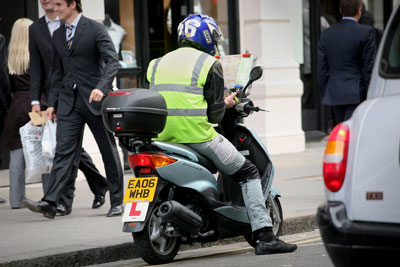 It takes the average person between 2 and 4 years to learn ‘the knowledge’.   You can see trainee taxi drivers in London every day – they travel around the city on small scooters with maps attached to the front of the bike.  These scooter (or moped) riders are not lost! They are following maps of one (or more) of the basic routes through London and are memorising it, learning the names of every street, pub, school and point of interest that they pass.

If you stop a black cab driver in the street and ask him to take you home after you have been shopping in Central London, he will be able to tell you quicker than any GPS system how to get to your house.

In Milano and other cities in Italy, the number of taxi drivers is restricted by local government, which creates a monopoly. This restriction allows drivers to sell their taxi licence at insane prices, usually for well over €100,000. In London, there is no restriction on the number of taxis, and if you can pass the ‘Knowledge’, you only need to pay between  £230.00 and £115.00 for your Hackney Carriage (taxi) licence, depending on the type of vehicle you use. The lower price is for environmentally-friendly cars.